The Times of Israel: The Islamic State Sinai Province said in a statement posted online, “A military squad fired a number of Grad rockets at communities of Jewish usurpers in the town of Eilat.” 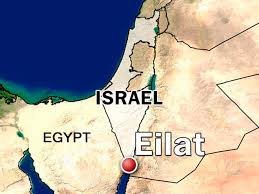 The statement said the group attacked Israel “in order to teach the Jews and the crusaders a proxy war will not avail them of anything.”

“The future will be more calamitous with Allah’s permission,” the statement said. more ..

Opinion: It was in the same location, the Sinai desert, that an ancient enemy attacked the Israelites in the Exodus:

Excerpt Blood Feud, chapter 3: “No sooner had he heard of Israel’s departure from Egypt, than he set out against them and met them by the Red Sea. Amalek now marched from his settlement in Seir [Jordan] which was no less than four hundred parasangs [approximately 900 miles] away from the encampment of the Jews; and although five nations, the Hittites, the Hivites, the Jebusites, the Amorites, and the Canaanites, had their dwellings between his home and the camp of the Jews, he insisted upon being the first to declare war upon Israel.”

How incredible it is that the trouble in the Sinai began 3500 years ago with the first terrorist, an illegitimate grandson of Esau.

Excerpts, Antichrist: The Search For Amalek: “This enemy of Israel bore the name Amalek (Hebrew ‘am, people or nation; and laqaq, to lap or lick) to denote the rapidity with which he moved against Israel, for like a swarm of locusts, he flew upon them; the name furthermore designated the purpose of this enemy, who came to lick the blood of Israel.”

ISIS bears the same characteristics as its predecessor:  “Not only did Amalek kill them, but he also mutilated their corpses, following the example of his grandsire Esau, by cutting off a certain part of the body, and throwing it toward heaven with the mocking words, “Here shalt Thou have what Thou desirest.” In this way did he jeer at the token of the Abrahamic Covenant.”

And the trouble continues in the Sinai.