BIN: The Jordanian government filed an official complaint with the Israeli Foreign Ministry, objecting to a recent ruling by the Jerusalem Magistrate’s Court stating that it is not illegal for Jews to pray outside the Temple Mount.

According to Israel’s Channel 10,  Jordan charged Israel with “violating the status quo in the area and is carrying out extreme provocations that harm relations between our two countries.”

The “status quo” refers to a long-held arrangement between Jerusalem and Amman whereby Jordan became the religious custodian over the Temple Mount. According to the agreement, Jews may still visit the Temple Mount, which is the holiest site for the Jewish people, however, only Muslims are allowed to pray on the Temple Mount compound. more …

History records that Israel scored a stunning victory in just 6 days by remembering a victory over the Persian army in 400 BC when the Jews pre-empted an attack and struck first (Esther 8:11-17).

In 1967 a small Israeli army preempted massive attack from Egypt, Syria and Jordan, uniting east and west Jerusalem in a victory that has every Arab nation reeling from embarrassment, and the progressive left still demanding that Israel give back all the land.

By the looks of this headline one would think that Jordan was the victor. So what happened in 1967 that makes the Temple Mount prohibited to Jews? 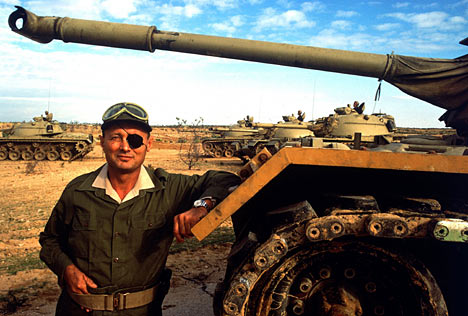 In the 6 day war, Israel indeed liberated the West Bank, East Jerusalem, the Gaza Strip, the Golan Heights and the Sinai Peninsula. The leader of the Israeli forces was General Moshe Dayan (above). Like most Israeli generals, Dayan was a secular Jew.

Arab leaders at that time were sure that Dayan would order the al-Aqsa Mosque to be destroyed and a Jewish Temple to be built. They, and the rest of the world, never expected what would happen next. Dayan, fearing that the fighting would never stop, decided to relinquish ownership of the Temple Mount to the Arab Waqf (religious authority) as a sign of peace and good will.

Dayan ordered the Israeli flag removed from the top of the Dome of the Rock, and ordered Israeli troops to bring fleeing Arabs that were on their way to Jordan back to Judea. Inexplicably, Dayan gave them the cities of Bethlehem, Hebron, Ramallah and Jenin.

Bible Prophecy, however, demands a third temple will be built:

Ezekiel 40-45 gives us the exact details of the temple that the secular world says will never be built.

Jordan: Temple Mount is Place of Worship for Muslims Only!

Jewish prayer has returned to the Temple Mount