Independent: New findings on small earthquakes in California’s San Bernardino basin suggest that something strange is going on underground.

The study, published in Geophysical Research Letters, looked at deformation patterns for thousands of quakes occurring deep below the San Andreas and San Jacinto faults. more …

Opinion: “… And there will be famines, pestilences, and earthquakes in various places” Matthew 24:7.

Way back in 2010, I tried to build a study that would prove the world was near the tribulation by measuring earthquake frequency over the last hundred years. I could not make it fit even though there was a conspicuous jump in earthquake activity in the 1940’s, the decade of Israel’s prophesied rebirth. (source) 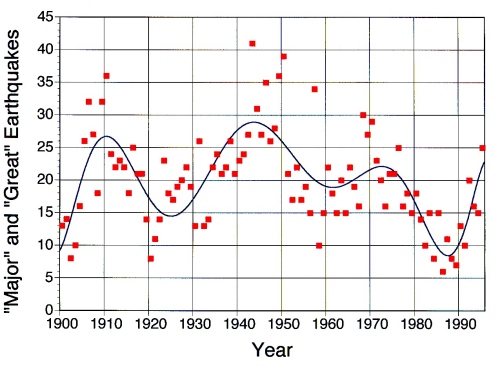 The rest of the data didn’t seem to prove anything except that science has gotten better instruments to measure small to medium earthquakes.

Most people, including myself at the time, believed that the signs given in Matthew 24 were meant for the church. After trying for years to put a round peg in a square hole I realized, with the help of Dispensational scholars, that Jesus was speaking not to the church but to His Jewish followers of the day.

Let’s look at 8 clues that the church is not present in the Olivet Discourse:

Mat. 24:5 “ For many will come in My name, saying, ‘I am the Christ,’ and will deceive many”  – The church would never be deceived by an impostor knowing that Christ comes from above on a White Horse after the tribulation (Rev. 19:13-16).

Mat 24:9 “Then they will deliver you up to tribulation and kill you, and you will be hated by all nations for My name’s sake” – Jesus told us the the gates of hell would never overcome His church (Mat. 16:18).

Mat. 24:13 “But he who endures to the end shall be saved” – The true church of Jesus Christ is saved for belief in Him, not endurance. According to Zechariah 12:10 the Jews who endure to the end of the tribulation will come to Jesus and be saved.

Mat. 24:15 “Therefore when you see the ‘abomination of desolation,’ spoken of by Daniel the prophet, standing in the holy place” – A clear reference to those in Jerusalem and the coming third temple who will see Antichrist desecrate the temple.

Mat. 24:16 “then let those who are in Judea flee to the mountains” – Those in Judea are clearly not the church.

Mat. 24:20 “And pray that your flight may not be in winter or on the Sabbath” – again a reference only Jews would understand.

Mat. 24:38-39 “For as in the days before the flood, they were eating and drinking, marrying and giving in marriage, until the day that Noah entered the ark, and did not know until the flood came and took them all away, so also will the coming of the Son of Man be” – The true church of Jesus Christ is prepared and longing for His appearing (1 Tim. 4:8).

Jeremiah 30:7 NIV is clear what the tribulation is about:

How awful that day will be!
No other will be like it.
It will be a time of trouble for Jacob (Gen. 35:10)
but he will be saved out of it.

How a New U.S Silver Quarter with a Bat on it was Foretold in the Book of Isaiah

Stop ‘Appeasement’ of Antisemites, Amid Ongoing Rise of Hate Crimes in Germany

How a New U.S Silver Quarter with a Bat on it was Foretold in the Book of Isaiah