Zero Hedge: When we first heard news reports about a new investor in Deutsche Bank (DB), we of course assumed that this meant the purchase of new shares and thus an increase in capital.  But no, it was merely an “activist investor” taking a stake in existing shares.  Is this really news or merely a sign of a top in large bank stocks?  The DB common is trading a hair over $10 or just 0.3x book value and has a beta of 1.5.

Douglas Braunstein, founder and managing partner of Hudson Executive Capital and J.P. Morgan’s (JPM) former CFO, said in an interview with CNBC that the firm has taken on the stake over the last few months after studying the stock for a year.

First on the list of concerns is profitability.  DB has been struggling for years to find a business strategy to deliver consistent profitability, the key measure of stability for any bank.

Second is capital.  DB has just €61 billion or 4% capital to total assets of €1.5 trillion, one of the lowest simple leverage ratios of any major bank worldwide.

The third key concern among a far longer list of questions is the franchise. The DB supervisory board has shown no vision when it comes to focusing the bank’s business on more profitable areas. more …

Opinion: Pay no attention to the man behind the screen. Ten years ago Deutsche Bank (DB) was trading over €40 on the stock exchange, today it is 10.

When you consider that massive money printing (QE) saved US banks from insolvency, you have to wonder why the same or more money printing by the EU central bank didn’t help DB.

What does Deutsche Bank have to do with end times prophecy? Germany’s economy is the lynch pin for the entire EU, and Daniel chapters 2, 7 and 9 point to a complete breakdown and restructuring of the revived Roman Empire, and a king Daniel calls ‘Little Horn’ rising out of the chaos.

Translation: The risk associated with a net loss of €23 billion or more in manufactured (derivative) investments is massive and could cause DB shares to require a central bank bail out causing a chain reaction … 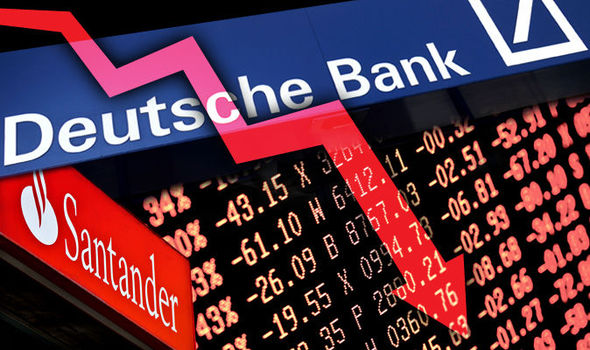 Recession Signs Are Hitting Europe; Is Lagarde Up For The Challenge?

The Fed Is Stuck In QE Hell